Back the Bill – the right to a good home in Wales 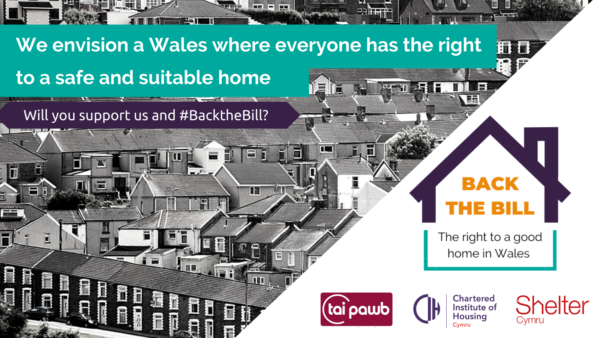 Wales is in the midst of a housing crisis. Demand significantly outstrips supply. Many people are unable to afford homes in their local communities. And, for some, the suitability – and safety – of their home is grossly inadequate. It was the housing crisis that contributed to the tragic circumstances of the Grenfell fire in North London in 2017, claiming 72 lives. We must put measures in place to avoid this ever happening again.

We believe that at the core of any solution to the housing crisis is a national commitment to the fundamental principle that every one of us should have a human right – underpinned by law – to access adequate and sustainable housing.

A Bill for the right to adequate housing would create a legislative framework to help address some of the key issues of the day:

Homelessness: ensuring we build on some of the measures taken during the COVID-19 crisis, including maximising investment in social housing and support

Security of tenure: strengthening the position of Welsh Government in its rights-based approach, better balancing the rights of tenants to live in security with those of private landlords

Accessible housing: ensuring proper consideration of disabled people’s rights in a housing context, giving them a voice to have those rights recognised and, if needed, enforced

Resource: will push housing up the policy priority list and in turn ensure increased focus of resource and investment, tackling the chronic under-supply of housing as well as support services

Check who has already signed

Read the draft bill in English

Read the draft bill in Welsh

We ask you to join us in calling for housing to be recognised as a fundamental right in Wales by filling in the form below to become a signatory to the Draft Bill:

Find out more and read the report

On 18th of June 2019 Tai Pawb, CIH Cymru and Shelter Cymru launched a jointly-commissioned report looking at the positive impacts that incorporating the UN-enshrined right to adequate housing would have in Wales in helping to tackle the housing crisis.

The call comes two years after the tragedy of Grenfell Tower, where 72 people lost their lives as a direct result of inadequate housing.

In an event sponsored by John Griffiths AM, chair of the Senedd Equalities, Local Government and Communities committee, attendees heard from all three organisations and the report author, Dr Simon Hoffman (Swansea University). The report makes a strong case for the recognition of the right to housing in Wales, demonstrating how it would help address key housing issues such as homelessness and the severe shortage of affordable and accessible housing.

“We believe that at the core of any solution to the housing crisis in Wales must be a national commitment to the principle that everybody should have a human right – underpinned by law – to access adequate and sustainable housing. We need a vision and a legal framework that would help us shift the paradigm of the way housing is understood – namely as being central to the dignity of every person, where people in need are rights holders, not charity recipients.”

The report demonstrates how the right to housing would help solve issues such as the lack of accessible homes, requiring there to be a focus on those most in need of housing.

Jillian Wadley, a disabled tenant living in Cwmbran, previously lived in a house that was inaccessible.

“I really struggled in that time with tasks that many people often take for granted. For example, without a stair lift, I would have to climb the stairs with the help of my husband holding me, but often, my back would give way and I would fall down. Eventually, our landlord organised for a stair lift to be fitted until a suitable home was found.

“It almost seems that being disabled is okay so long as you don’t have children, because many adapted or accessible homes are just one or two-bedroom properties. We really need to build many more accessible homes but, as it stands, there aren’t any clear plans to do so. This needs to be addressed as there are so many disabled people who live in properties that are not suitable for their needs.”

In adopting a rights-based approach to housing, Wales would follow a growing number of countries where the right to housing is a constitutional principle, including Finland, where homelessness has fallen by 35 per cent since 2010. In a similar period, homelessness in Wales has risen by 63 per cent[1].

“This is an opportunity to re-energise and re-purpose the original commitment to providing that most fundamental of human rights – a safe place we can call home – by adopting a rights-based approach to housing and fully incorporating the ‘Right to Adequate Housing’ into Welsh law. We can look to international examples, including in Canada, South America, the US and Finland, where the right to housing has been enshrined, in various ways, into the delivery of public services, together with recent developments in Scotland, and use them as a platform for advancing the rights agenda in Wales.”

“A right to a home, enshrined in Welsh law, would require all public services to have proper regard to a person’s human rights and would positively change many of those decisions that drive people into homelessness. Such a right would also increase a citizen’s ability to challenge poor decisions that led to them becoming homeless in the first place.”

The report marks the beginning of a joint campaign by the three organisations on the right to housing, which will also involve sector and wider stakeholder engagement ahead of the next Welsh Assembly elections scheduled for 2021.

How you can show your support

Don’t forget to tag us and #BacktheBill

Here are some suggested tweets to show your support:

I believe in a Wales where the threats of homelessness, inaccessibility and unaffordability are things of the past #BacktheBill

I #BacktheBill for the right to a good home in Wales. Every one of us should have a human right – underpinned by law – to access adequate and sustainable housing

We #BacktheBill to recognise #housing as a fundamental right in Wales

We #BacktheBill for a right to a good home in Wales, helping address some of the key #housing issues of the day such as homelessness, accessibility and affordability

Add our Back the Bill twibbon to your profile picture! 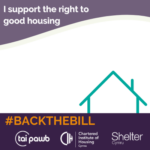 Add the Back the Bill twibbon to your profile picture here 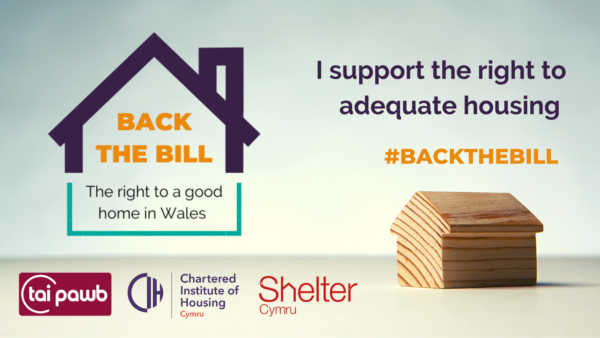