Home / Accessible Homes for the Future

Accessible Homes for the Future 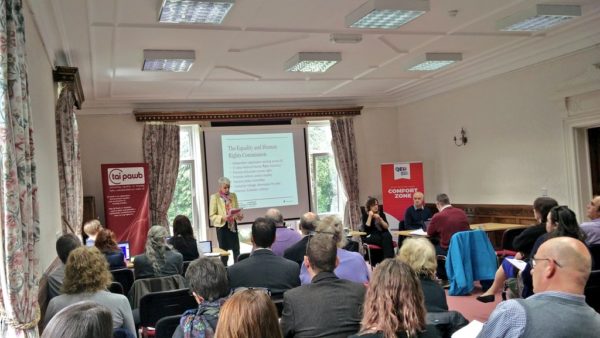 Tai Pawb made the trip to Newtown right in the middle of Wales to discuss and present on Accessible Homes.

We were very glad to have Ruth Coombs, Head of EHRC Wales as the headline speaker to share emerging findings from the Commissions UK Inquiry into Housing for Disabled People.

One of the key findings was that very few local authorities set a percentage target for accessible and adaptable housing.

Welsh Government’s ambitious figure of 20,000 new homes has been generally welcomed in the sector but it is worrying to hear there is no plan to address the clear shortage of accessible housing as part of this agenda.

Across Great Britain the Commission found that there was a chronic shortage of accessible housing. In England only 7% of homes offer minimal accessibility features and in Scotland only 0.7% of Local Authority housing is accessible to wheelchair users.

There is currently no equivalent data in Wales. The Welsh Housing Conditions Survey has not been published since 1998 but the Welsh Government have reinstated it for this year.

This is one of the subjects that was cited most often by speakers and delegates at the seminar. A lack of data, inconsistent data and ‘dirty data’ were all mentioned as barriers to progress. Whilst there is abundant anecdotal evidence and local studies into the amount of accessible housing, there is simply not enough to paint a national picture across Wales. This data is the backbone of planning, without which it is impossible to form a realistic strategy to ensure that the suitable type and amount of housing is built.

As well as the new Welsh Housing conditions Survey, there were some other possibilities for improvement in this area. Simon Prothero from the Welsh Government referred to the upcoming ENABLE report, which should provide better data as well as The Secure Anonymised Information Linkage (SAIL) Databank, a vast database containing health and population records spanning 20 years.

It is hoped that these new sources of information will support the sector to make better decisions, and to spur on the collection and distribution of more studies on accessible housing stock and demand.

Miranda Evans from Disability Wales believed that involvement has gone downhill in recent years, and has lost focus since the Disability Discrimination Act was introduced in 1995 (amended in 2005). She also stated that what works for disabled people, works for everyone.

Following on from this, a workshop group discussed how Equality Impact Assessments are still not prioritised in many local authorities and are rushed through towards the end of the process instead of informing it from the beginning. When completed early, the whole process can be improved for everyone and not just those directly affected. They should form the basis of planning and be used as an opportunity for long term improvement.

It was also emphasised that speaking to a wide range of individuals is important as everyone’s disability is different, and unique to them.

The third key theme of the seminar was highlighted by Ruth Coombs at the beginning of the day and echoed throughout the other presentations.

The EHRC Inquiry found the following:

A shocking statistic from Robin Alldred, Wales and West Housing, showed that in the five years leading up to a study of those referred for a Disabled Facilities Grant (DFG), 234 out of 1,060 (22%) died before receiving their adaptation.

However, it was shown that in cases where adaptations were made, the positive effects were long lasting and sustained people in their own homes for longer.

There is also strong anecdotal evidence that Housing Associations and local authorities that employed Housing-specific Occupational Therapists were able to handle more adaptations in a more consistent way. It was further suggested that their use be made mandatory but research would be needed to prove their efficiency and efficacy. 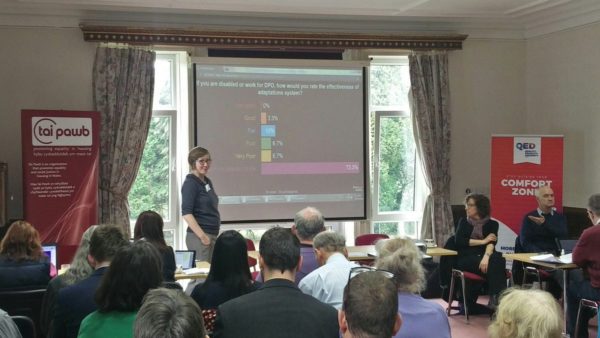 We believe the event was successful in sharing some best practice from areas such as Caerphilly County Borough Council’s housing team and for increasing participant’s knowledge of a complex world of adaptations and accessibility.

Alicja Zalesinska’s use of DirectPoll was a useful way to gauge and visualise the room’s opinions on a range of accessibility subjects, which generated further discussion.

There is, as always, much to do in this field, and we hope that by linking up organisations and people with similar mind-sets we can continue the fantastic work often being done in and ensure this is no longer done isolation.