Home / Girls seeing girls choose: Why I wrote ‘What’s a girl to do?’

Girls seeing girls choose: Why I wrote ‘What’s a girl to do?’

Alison Powell, author of “What’s a girl to do?” and former local authority Housing Team Leader, shares with Tai Pawb her motivation for writing a children’s book to encourage girls into STEM careers, and reflects on the relevance to the gender pay gap in housing. 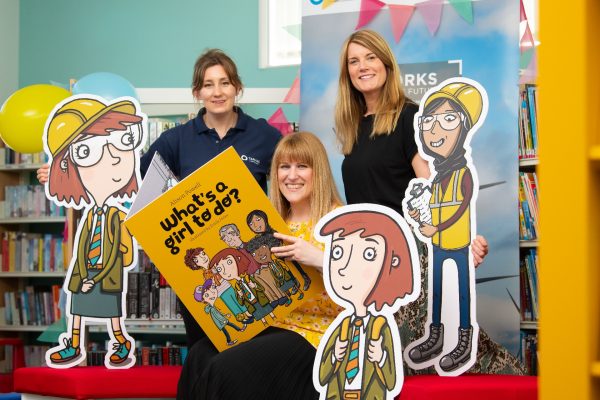 Growing up, I was surrounded by girls like me. Polly in ‘The Secret World of Polly Flint’; Elizabeth in ‘Sweet Valley High’; Anne in ‘Anne of Green Gables’ and any number of other dreamers, schemers, writers and wonderers. They may have sometimes worn bloomers and underskirts, they may have lived on Prince Edward Island or California, but at their heart, in the very nub of their being, they had vivid imaginations, were creative, imagined stories. They were me and I was them. Or so I thought. And when you are eight or ten or twelve, that is what matters. Even if my parents didn’t understand me; or if I squabbled with a friend or if a teacher upset me, I had characters in books, carefully catalogued on my shelves, that told me I was not alone. What I was feeling was what others felt. What I dreamed of, others dreamed. What I feared, others were worried about too. What I looked like, others looked like too.

In writing my children’s book, ‘What’s a girl to do’, that was a constant concern. In speaking to little girls about the challenges and career choices they face, it was as important to me that my characters looked like little girls all across the UK as it was to capture their language, their feelings, their hopes, aspirations, concerns and above all their dreams.

The story came about following an approach from Kara, the Environmental coordinator at Aberthaw Cement, a Tarmac company. She and Nicola Jenkins a communications consultant were discussing the issue of how to promote engineering as a career choice to young girls, I was contacted and discussions were had about a children’s book.

Every bone in my body screamed, ‘No, I have never written for children’, but every sound from my mouth said, ‘Yes, I want to do this’ and above all, ‘I have to do this.’

Why – well, for several reasons, my daughter, first and foremost. I went on a school trip with her class last year to Renishaw, an engineering company. For me it was a mind-opening, jaw-dropping day. When the children were asked if they were considering engineering as a career, my daughter was the only girl hand in the air flying with the pointed up palms of many boys. The class was roughly 50/50 split, so this disparity, at such a young age, shocked me.

My daughter’s Dad is an engineer so I wondered if maybe that was an influence, but surely other girls in the class had a parent who was an engineer? Maybe not? In the absence of real-world role models, it turned me once more to the land of make-believe and books.

The second reason was the economic. I did a quick online search on ‘unfilled engineering jobs’ and article after article pinged to the page about the massive skills gap we have across the UK. Job after job in the engineering sector remains unfilled. Around 50% of the population is female but less than 13% of the engineering workforce is which leads me on to the third reason, social justice and fairness. There is no way of squinting your eyes, screwing your face up and looking at things from any angle, that says that for women to be so underrepresented in a whole sector, is remotely fair or speaking to anywhere near where a equal society should be.

This gender inequality is echoed across the Housing Sector.  The gender pay gap means that women will spend a higher proportion of their salary on rent; women are more likely than men to be claiming Housing Benefit and if a women wishes to buy, on average it will cost her many more times the median female salary to secure a mortgage than a man’s median salary. In terms of employment within the sector, I suspect there is a great disparity in gender employment in trades i.e. carpentry or welding etc…. A recent ‘Inside Housing’ article discussed the prevalence of men in development, property services and technology functions. Due to competition with the private sector for the right skills, these roles will likely attract the bigger salaries, but not necessarily an equal gender balance.

This brings me full circle to my opening gambit about role-models, about characters with whom we can identify. Young girls need to see them in the real-world and in the world of their imaginations, which is so often influenced by popular culture all around them, from television, to what they see online to books. It was therefore something I was passionate about to have central BAME characters with story arcs, motivations and a life of their own. The absence of BAME characters in mainstream children’s books, never ceases to astound me and if I thought that all little girls wanted a variety of characters to relate to, I imagined BAME girls must be desperate for this and above all, deserving of having this desire, met.

And so, dear reader, I wrote it. I wrote a story, inspired by my daughter in the hope of inspiring little girls everywhere. From whatever background, race, religion and whatever their orientation and experience, I wanted to say, you can have a dream and you can go for it. You don’t have to be an engineer and indeed there is a key character in my book that takes a very different path, but you do need to know that you have choices and I will give you page after page reinforcing your right to choose.